The club is hosting a singles league starting Sunday, March 5. Participants must pay a one-time entry fee of $20 prior to the start of the first round of the league. Players will compete in one of two divisions. Play will rotate among Kanawha Valley area courses. Prizes will be awarded to division winners at the conclusion of the league.

For scores and schedule, visit the league’s page at The Disc Golf Scene.

The club will be hosting a random draw doubles league this spring. Weekly rounds will take place on Tuesdays. Club members and new players alike are welcome. There is no fee to play. Optional ace pools ($1 buy-in, $100 max. payout or $2 buy-in, $200 max payout) will be available.

Play will rotate among all Kanawha Valley area courses, including the new TA Travel Center and Eleanor Park courses. The league will begin on March 14 at Redeemer Park. Start times will vary depending on sunset times. For a detailed schedule and scores, visit the league’s page at The Disc Golf Scene. You can also visit the club’s Facebook page for updates about the league.

Please note that this year, the club will hold multiple seasonal leagues rather than one year-long league.

Online registration and other information can be found at The Disc Golf Scene. 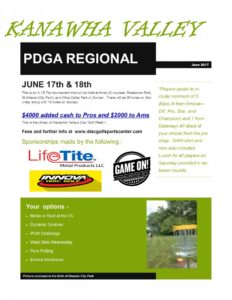 The 8th annual Kanawha Valley Ice Bowl will be held on the golf course at Shawnee Park in Dunbar on Saturday, February 11. The fee for registration will be $25 plus a food donation for Manna Meal. Each registered player will receive a players pack that includes a free Gateway disc and a mini.

For registration or other information about the 2016 Ice Bowl, visit The Disc Golf Scene. 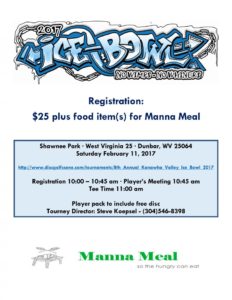 Thanks to Tank Scarbro and Bill Moss for representing our club at the JDRF One Walk event. Below are photos from the club’s involvement in the event. 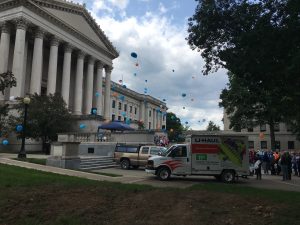 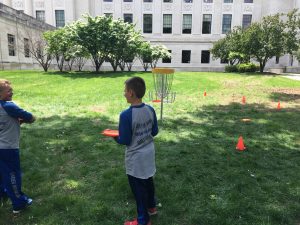 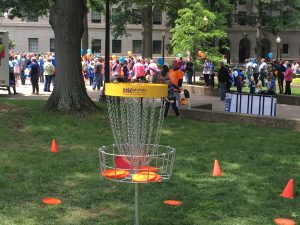 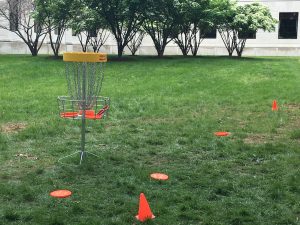 The club will be bringing baskets to the JDRF One Walk event at the Charleston Capitol Complex on May 15 for an outreach event. Club members will host an interactive putting demonstration before participating in the walk around the complex.

More information about the walk can be found at jdrf.org.

To ensure that club members are kept informed of the activities of the board, the minutes from board meetings will be posted on the Board meeting minutes page.

Club members are encouraged to attend board meetings. Contact a board member for the date of the next meeting or if there is an issue that you would like discussed at the next board meeting.

The club is hosting a casual weekly round for club members and new players alike. This league runs March 15, 2016, through October 25, 2016.

Teams are determined each round by random draw. Typically, the doubles format played will be “best disc.” However, we will occasionally mix things up by playing an alternate format such as “worst disc.”

After each round, each player is awarded a point total that is determined by the number of teams that his or her team has beaten that round. Overall league standings are determined by total points accumulated during the season in this way.

There is no fee to play, but there are two optional ace pools. There is a $100 pool with a $1 entry, and there is a $200 pool that has a $2 entry. If you pay into an ace pool and get an ace during the round, then you collect the pot. Players may not enter more than one ace pool per round.

Prior to each round and after all ace pool entries have been collected, a random draw determines which hole (out of a list of three designated holes per course) will award a doubled payout for aces during that round. For example, if Hole 4 has been drawn prior to a round and a player who paid $2 aces Hole 4, then that player will receive a $400 payout. However, if that player aces any other hole instead, then he or she receives a $200 payout.

Rounds will be held on a rotating schedule among Redeemer, Little Creek, Wine Cellar, St. Albans, and Coonskin. Refer to the league’s page at The Disc Golf Scene for the schedule and standings. The club’s Facebook page often has announcements regarding this league and others, as well. Note that this league’s rounds are held on Tuesdays, but start times change throughout the year according to sunset times.

The purpose of the 2016 Bag Tag Challenge is to promote the growth of disc golf in the KVDGC through friendly competition. You will have the opportunity to meet and play with new people and to establish friendships with players whom you may have never otherwise met. It also adds another element to your game and is a great learning tool for all players– especially new players. Players of all abilities are encouraged to join.

A $5 entry fee gets you a numbered bag tag, a one-year club membership, and eligibility for entry into the ace pot.

This league is designed to bring together those who share a passion for the game of disc golf. Set goals, make new friends and rivals, HAVE FUN, and most importantly: GRIP IT RIP IT. Good luck to everyone and here’s to another exciting season of disc golf.

The club will host a singles league intended to promote competitive fun and increase the spirit of camaraderie in the West Virginia-Ohio-Kentucky region. Ten weekly rounds will be played on Sundays at 1:30pm. The first round will be held on Sunday, March 13, 2016. Rounds will take place at St. Albans City Park, Redeemer Park, Little Creek Park, Coonskin Park, and Wine Cellar park.

Refer to the chart below for more on this league, or visit the league’s page at The Disc Golf Scene.

Registration fee
Participants must pay $20 for registration by the time of the first event.
Divisions
The league will be divided into AM-1 (intermediate/advanced) and AM-2 (novice/recreational) divisions. All competition will take place within divisions, and players will not be allowed to change divisions during the series.
Prizes
The first place finisher in each division will be awarded a backpack. Each division receives a 50% prize payout at the conclusion of the series.
Scoring
After a round, each participating player will be awarded one point per player that he or she has beaten, plus one point for playing. Total points accumulated in this manner will determine placement at the conclusion of the series.
Schedule
The series starts on Sunday, March 13, 2016, at 1:30pm at Redeemer Park. A detailed schedule can be found at The Disc Golf Scene. Competitors shall not circumvent this schedule. The weekly course and layout must be played per schedule guidelines, and this is the only score that can be reported per scheduled week. Players who are unable to play on Sunday may still participate according to the absentee requirements listed below. The organizer reserves the right to adjust the schedule as needed.
Absentee requirements

Remember, the main purpose of this league is for players to have fun!