Online registration and schedule information can be found at The Disc Golf Scene.

We will run an experimental handicapped league starting February 25 at Redeemer. A formula will be used to determine a handicap for each player, and all players will compete in one division.

The fee for play is $5.00 per session, and non-KVDGC members pay an additional one-time fee of $5.00. Cash prizes will be awarded after each session. 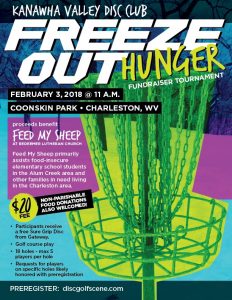 Please note that weather may affect the start time of play. For registration and schedule information, visit the Disc Golf Scene.

This is a fundraiser for hunger and proceeds will go to the “Feed My Sheep Program.”

All participants will receive free Sure Grip Disc from Gateway. This will be the first year playing on a golf course. 18 holes – max 5 players per hole and requests for players on specific holes will try to be honored if you preregister.

Participants can bring a food donation in addition to monetary contributions. Click here for a list of preferred food items.

Mulligans can be purchased for fundraising purposes at $1.00 per mulligan with a $20.00 max for the tournament. Each mulligan purchased will enter you into raffle. At the $10.00 and $20.00 levels there will be choice of free shirt, disc or other miscellaneous gift as a thanks for donating to a worthy cause.

If you are looking to get in an early morning round of disc golf at Coonskin Park this winter, then please take note of the following announcement.

Players at Coonskin Park must wait until the grass is free of frost to begin play for the day. This precaution helps to keep the golf course in good shape. Feel free to inquire at the clubhouse if you are unsure of conditions on any given day.

Sunday, October 29, 2017, Shawnee Park in Dunbar will host the final round of this fall’s glow league. The glow round is scheduled to start at 8pm.

Greens fees for players not participating in the glow league will be $10. In addition to a final round at Shawnee, the fee covers a player’s choice of Kanawha Valley Disc Golf Club shirt, hat, disc, or towel while supplies last. A optional ace fund buy-in will be $2.

Club members are encouraged to arrive at 3pm to help set up the temporary course. Once the course is installed at about 4pm, it will be open for casual play until the glow round starts.

Shawnee Park will undergo major changes soon, and it is not likely that disc golf will return to the park in the foreseeable future. Don’t miss out on this opportunity!

On Saturday, October 21, Redeemer Park will host the Feed My Sheep Charity Disc Golf Tournament. This is a skins event. Each players can choose the other three competitors on his or her card provided the entire foursome agrees. In addition to the skins tournament, there will be a skills contest in which players compete for a Yeti cooler. The tournament is part of Reformation Fest, and free food and adult beverages will be served. Kids will have access to games and activities.

Registration is free and will take place on a first-come, first-serve basis. Players are asked to bring food for the food bank for Alum Creek Elementary students. Each player will receive a free disc. Visit The Disc Golf Scene for more information. 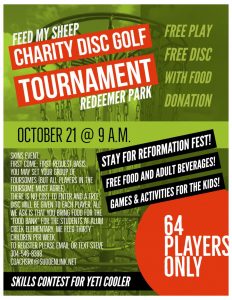 A fall glow league series will start at Redeemer Park on Tuesday, October 3. The first 25 players to register will receive players packs. Items in the pack include a Stuff Sack, two LED lights, a glow stick, a Sharpie marker, an Innova glow mini, and Halloween candy.

The cost to register is $20. Registration fees cover players packs, CTP prizes, an ace fund, prize payouts, and four rounds of glow golf. The final round will be the last time that disc golf is played on the golf course at Shawnee Park on Saturday, October 28! The golf course will be reserved for disc golfers after 3PM, so players will have the chance to play a daylight round or two before glow golf begins.

Visit the leagues page at The Disc Golf Scene for schedule and other information. 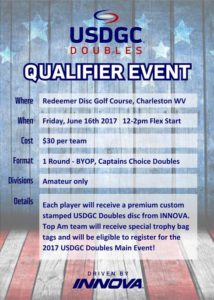 A 2017 USDGC Doubles Qualifier has been added to the already-packed schedule for the week of the 3rd Annual Kanawha Valley Regional Tournament!

The format is Bring Your Own Partner – Captain’s Choice. The cost to register is $30 per team.

The event takes place Friday, June 16, 2017, at Redeemer Park. There is a 12pm-2pm flex start. Each player receives a premium custom stamped USDGC Doubles disc from Innova, and the top team will receive special trophy bag tags and eligibility to register for the 2017 USDGC Doubles Main Event.

Online registration for the qualifier is at Disc Golf United.

This year’s Kanawha Valley Regional Tournament takes place on Saturday, June 17, and Sunday, June 18. However, the week of Monday, June 12, will be full of fun disc golf-related events.

The KVDGC is hosting a putting league in the Dunbar Recreation Center. Randomly drawn doubles teams compete in weekly tournaments. The fee to play is $2 per session. Payout is at the end of each session.

Visit the league’s page at The Disc Golf Scene.